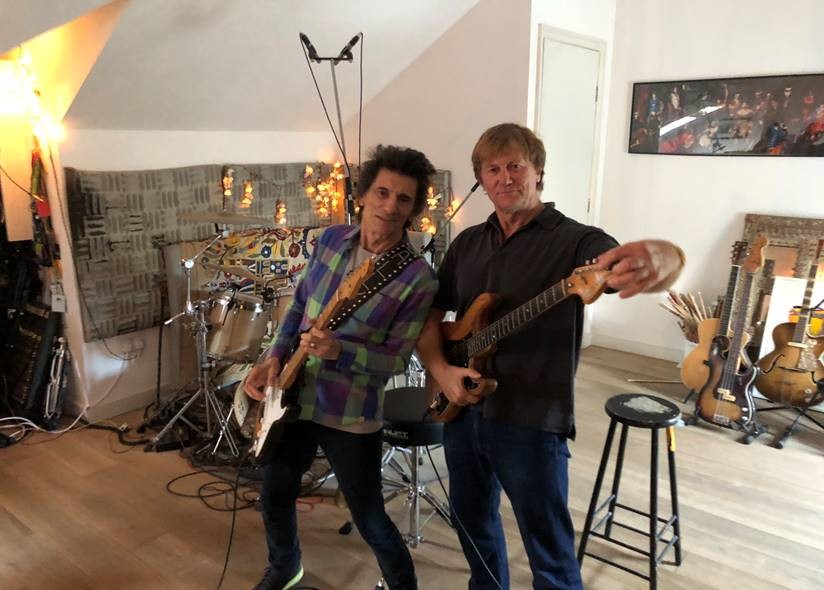 An array of British rock and screen icons have come together to honour the sacrifice of young World War I soldiers and to raise awareness of a new “great war” – the battle against cancer.

Ronnie Wood of the Rolling Stones, Nick Mason of Pink Floyd, Brian Eno, Sinead O’Connor, Imelda May and acclaimed actor Cillian Murphy have recorded One More Yard – an EP inspired by the heroism and letters home from a young Irish soldier who fell in the fields of Flanders in 1917.

The project was the brainchild of Media House International client Professor Sir Christopher Evans, OBE, one of the UK’s leading scientific entrepreneurs, who has spent four years carefully researching many thousands of letters sent home from the front.

Sir Chris said: “We used the actual words used by soldiers in their letters to write a collection of songs that reflect the extraordinary stories of sacrifice and courage of these young men, many of them only in their teens.”

One of these brave boys, Lieutenant Michael Thomas Wall, of the Royal Irish Regiment, was killed in 1917, but like so many other serving soldiers he had recorded the horrors of war in numerous letters to his beloved mother.

In one, Michael wrote: ”Nothing was spared, nothing – and when done there was not one more yard left.”

Battling “one more yard” across no man ‘s land was a phrase often repeated by many soldiers in their letters and diaries.

Sir Christopher Evans with Ronnie Wood, one of the stars who signed up to the project

The EP is produced by renowned music producer John Reynolds. It will be released on November 2, 2018.

Ronnie Wood said: “I love the track One More Yard – a sad true story set to a haunting melody. It was a pleasure playing on it. I hope everyone gets behind this great initiative – and there will be more news soon.”

Nick Mason said: “This is an outstanding project that allows people such as myself to pay our tribute to the young men of 100 years ago who fought for our freedom but also to do something to help many young people facing cancer today. I am delighted to part of bringing these songs to fruition.”

The project started four years ago (100 years on the from the start of WW1) when Sir Chris was conducting research on building a new cancer awareness charity.

He was struck by the emotional struggle but fighting spirit of young people confronted with the disease.

Many of their phrases, such as “I must fight on” were so similar to those used by young soldiers serving from 1914 to 1918 in the trenches on the Western Front.

With the assistance of the Imperial War Museum and the Dublin City Archives, Sir Chris researched many thousands of WWI letters, which provided all words and sentiments that became the substance of these songs.

Sir Chris says: “As we approach the centenary of Armistice Day, the sacrifice of all those young soldiers 100 years ago will be rightly honoured across the world.

“I feel exceptionally privileged that some of the greatest names in rock music and wonderful actors feel they too want to contribute and pay tribute to these outstanding young men through our music and words and, at the same time, help raise awareness of the challenges so many young people of today face in dealing with the dreadful disease that is cancer.”

The project, under the name Evamore, will see a complete album of songs released next year and proceeds will go to a new Cancer Awareness Trust, which will provide expert clinical advice and guidance to cancer sufferers around the world to help maximise their chances of overcoming their illness.

The EP will be available on all music platforms on November 2, with the website for the Cancer Awareness Trust launching on the same day at www.cancerawarenesstrust.org