EasyJet fly by seat of their pants in PR fail

EasyJet’s mishandling of the backless seat fiasco demonstrates how quickly a brand can lose control of its reputation online – even if the company is in the right.

Such was the airline’s ineptitude, they themselves contributed to the social and mainstream media spread of a photo taken by a passenger on one of their planes showing a traveller sitting in a broken seat that had no back.

The take-home message for businesses that use platforms such as Twitter (in this case) and Facebook is that in a media-savvy world, staff need to be trained to develop a “nose for bad news”.

And the airline’s media meltdown looks like it can put down to a lack of investment in learning programmes for staff who are strangers to a fast-moving news landscape in which almost every member of the public has the potential to be an “action news” reporter. 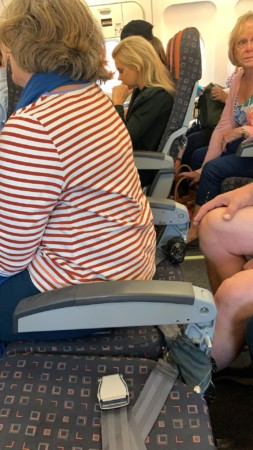 The wildfire started spreading yesterday morning (6/8/19) when Twitter user Matthew Harris Tweeted a photo of a woman passenger sitting on a seat with no back aboard an EasyJet plane that was bound from Luton to Geneva.

“How can this be allowed?” he asked. In of itself, it was enough to attract some attention in the Twittersphere.

But then came the moment of madness.

Fat was poured right on to the flames as an EasyJet customer service employee responded: “Hi Matthew, thanks for bringing this to our attention. Before we can investigate this could I ask you to remove the photograph & then DM us more info regarding this, so we can best assist you.”

And so thousands of Twitter users – suspecting that EasyJet had something to hide – began Retweeting Matthew’s message, its accompanying photo and EasyJet’s attempts to cover it all up.

Then newspapers, radio and television picked up the story as it jumped the firebreak between social and mainstream outlets.

The employee had followed the “golden rule” instruction given to customer service staff by social media training “experts” that when confronted by a disgruntled member of the public – “respond online, resolve offline”.

That’s reasonable advice that ordinarily calms inflamed situations – except it had the opposite effect here.

At the centre of this perfect storm of Tweets, Likes, Retweets and hashtags, the truth became lost – that EasyJet would never allow a jet to fly with a passenger propped on the edge of a broken seat.

The seat was, in fact, out of commission, and the woman had been put there temporarily while another one was found for her prior to take-off.

EasyJet did all they could to make it clear that she was sitting there only while other travellers were boarding but the damage had been done.

This proves that a lie can go viral quicker than the truth. That’s not to say that the Tweeter was not being honest; he was sincere. But he didn’t quite portray the reality in its entirety.

He also tapped into the sentiment currently doing the rounds that airlines like EasyJet, Ryanair and other such budget brands aren’t very well liked.

Media House International’s social media expert said: “EasyJet tried to control the affair by asking Matthew to take his Tweet down but that’s probably the silliest thing any brand can do.

“As soon as you do that, you upset the author by triggering writer’s indignation, which is what happened.

“We can’t blame the airline employee who Tweeted. It’s their line manager who’s responsible for not training them properly.

“It’s like answering the phone in a complaints department and then telling the customer not to complain – the only problem being that everyone can hear you.

“I know that companies aren’t spending enough on training staff in the art of social media use.

“EasyJet should have handled the matter with a bit more humour and less defensively – not to make light of it but to highlight the brand guidelines of the company and to make sure that everyone knows in no uncertain terms that the aircraft would never have taken off like that.

“By saying ‘please take this down and have a chat with us in a place a bit more safe’ implies that there was a real danger.

“The golden rule is to make sure you listen to your customers and do it in an open environment and in a very open and honest way. Sadly, EasyJet failed at all those things.”