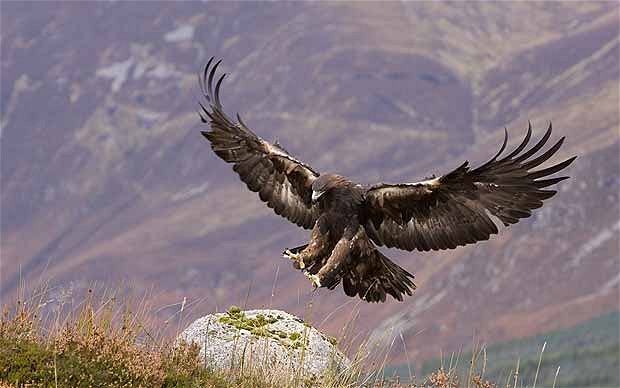 North Glenbuchat Estate, Strathdon, Aberdeenshire, issued the following statement in response to an appeal from the RSPB for information on the whereabouts of a satellite-tagged golden eagle.

Laura Sorrentino, director of the estate, said: “We have been made aware today of a statement sent to media outlets by RSPB appealing for information on the whereabouts of a satellite-tagged golden eagle whose transmitter appears to have stopped working.

“RSPB suggests that the bird has died and that no data had been recorded from its transmitter since March 5 or 6, when it was last recorded in the vicinity of our estate.

“The estate head keeper filmed what he firmly believes to be the eagle in question yesterday afternoon (March 30, 2017) at 2.17pm and that video (below) was sent to the wildlife crime officer later yesterday. We will also be contacting the RSPB.”

Mrs Sorrentino added: “Our head keeper has 14 years’ experience and is as confident as he can be that it is the bird in question, as he has seen it on a number of occasions and filmed it last month.

‘He was aware of the presence of the bird, as it had been in clear sight when the keepers were burning heather.

“The head keeper and two other keepers from the estate offered to help the police and RSPB representatives ascertain where they may find the bird they were looking for but visibility was poor on Wednesday.

“The RSPB people offered no explanation while at the estate and kept their faces hidden. We were therefore shocked to find out about the statement issued by RSPB today.

“The estate is shocked by the clear implication that the estate may have been involved in the disappearance of this eagle.

“There was an incident six years ago when a dead eagle was found on estate land and at that time the estate issued a very robust statement condemning the poisoning of birds of prey and emphatically denying any involvement.

“There is no evidence that the estate has been involved in any wrongdoing or criminal activity.

“As regards satellite tracking, it is interesting to note that Natural England tagged 47 juvenile hen harriers from 2007 to 2014, and, of the 47 tracked, 37 tags ceased transmitting.

“We have had a new keepering regime since February last year, headed by an extremely experienced keeper. We are appalled at the allegations made by RSPB and are in discussion with our legal representatives.

“Our estate – which is small in size – lies in a very densely keepered area of the country. We take our legal and wildlife responsibilities very seriously and our keepers are also fully aware of their responsibilities.”